Over the past few days, some of our users have reported to us that they are encountering wxwidgets runtime libs=static.

If you need to statically link wxWidgets on Windows (Visual Studio) (to avoid having to use the Microsoft Visual C++ Runtime to run the executable on other PCs) and you get this error message:

Open wxWidgetsbuildmswwx.dsw, select Unicode Release, Shift-click to select all of these ~20 projects, right-click and select Properties and Assets, Project, and under “C++ –> Assembly code”, change the runtime library under “Multithreading (/MT)”. For “Unicode Debugging” someone has to use “Multi-Threaded Debugging” (/MTd).

You may also need to edit build/msw/config.vc to enable it. 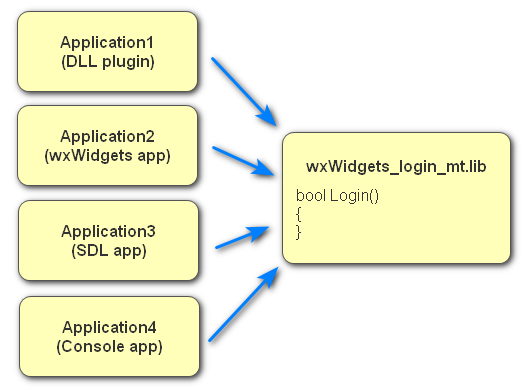 If you compile your program with the same settings, you will be able to statically link the wxWidgets libraries in your own project and the exe will actually work on other PCs without having to set up an environmentrunning MSVC.

Do you have questions about using makefiles, a compiler, or an IDE and need to figure out how to set them up for many wxWidgets, or why they don’t combine like other IDEs do? Ask your questions here.

Building Static Libraries With VS2013 (VC12)

I just downloaded the latest wxWidgets 3.0.1 type code for (Windows Nothing 31MB file) and built the idle libraries with VS2013 and all solution project types, and the VS2013 wx_vc12.sln files are included in that zip file. .

Unfortunately, all versions of the static libraries (Debug & Release for Win32 and x64 platforms) contain the wrong "Code Generation" "Runtime Library" compiler option, i.e. /MD Builds (Release or /MDd (Debug Builds)) instead of /MT or / MTd So the main config says you build your own static library, but this compiler produces DLL assembly code.

This may cause all wx_vc12_*.vcxproj files to remain fixed for static configsbuilds for both platforms.

What I usually worry about is that there are no VC10, VC11 or VC12 program files in the buildmsw directory in the GitHub repository and they are included in this initi zip - does it stop at VC9 or are they still available for download? ?

I'm embarrassed that the commit is wrong. The project changes files between versions. For the VS2013 example, the second line of each project image has been changed from:

I believe most of these solutions and project files require a lower default.

As far as specifying a runtime library as always a DLL when trying to build a static select, all I can say is that although the libraries can be built, the activity trying to use them gets complaints where they were built with the wrong configuration and will include more than just static libraries, so the project won't show up, of course. Could you provide a pass for what you think Microsoft recommends?

For wxWidgets 2.8.I 12 I used a special wxPack batch file (wxBuild_wxWidgets.bat) for my static build libraries (see

), but in the makefile"RUNTIME_LIBS=static" is specified (when building DLLs, "RUNTIME_LIBS=dynamic" takes precedence). I just downloaded the latest version of this computer file and it supports VS2013 and is for wxWidgets config and makefile.vc file. Did I attach anything? I may use it in the future. hp I don't use our leftover files/products while wxPack downloads are in use.

Actually, I just checked this infusion file. It works fine for me without VS2013 solution and project files AND models /MT and /MTd for static libraries as needed. It also supports VC7.1 and above because it uses gcc as the compiler, which I don't currently use.

So I no longer need to restore VC10, VC11 and VC12 solutions and therefore project files. Beware, they are still incorrect (as are probably the project's source files, which are still in the shared repositoryand), IMHO, because they don't necessarily specify the correct runtime libraries for statically building libraries.
Thanks anyway